Not long after the new year began, the novel coronavirus outbreak that first seemed relatively inconsequential became a full-blown pandemic. As it did, the U.S. economy took a stunning gut punch. In practically no time, the U.S. unemployment rate reached its highest levelsince the Great Depression. The country’s rapidly deteriorating economiccondition prompted the Federal Reserve to swing into action. On March 23, the Fed announced it would be applyquantitative easing (QE) in an unlimited fashion to help keep the economy functioning.

Almost immediately, gold began a strong upward surge. From March 23 through today, gold has climbed 30%. But if gold has been excited about ongoing QE, silver’s been positively euphoric, soaring 115% over the same period. Those familiar with the 2008-2011 precious metals bull runwill remember silver outperformed its more popular counterpart at that time, as well. While gold surged an admittedly impressive 160% during that market, silver jumped much higher, rising nearly 400%.

While Fed QE can be rocket fuel for precious metals in general, it seems to have a particularly energizing influence over silver. To understand why, you have to drill down into what exactly QE is as well as why silver’s unique profile makes it so receptive to QE’s effects.

Silver is a safe-haven asset. Like gold, silver has a tendency to strengthen during the sorts of uncertain economic and geopolitical conditions that drive people to precious metals. But silver has another property that gold does not: indispensable industrial utility.Silver is an outstanding conductor of heat and electricity. As a matter of fact, silver has the highest electrical conductivity of all metals.

It’s not that other precious metals have no industrial value. But there is no other precious metal that has evolved over centuries in the way silver has to become simultaneously a prized monetary metal and irreplaceable industrial metal. And it is precisely this “duality” unique to silver that can make it so singularly responsive to QE.

But how does this work? Why is it that this combination of properties makes silver, in particular, so QE-friendly?

To answer this question, you have to understand what QE is and what it does. Briefly, QE is an extreme monetary policy measure initiated by the Fed when the economy is in the direst of conditions. The goal of QE is to help keep the economy functioning through a contrived effort to inject a massive amount of cash into the money supply. But QE is much more drastic than the measures usually applied by the Fed in the course of administering monetary policy.QE involves the Fed purchase of enormous quantities of securities that fall outside the scope of those the central bank might otherwise buy. By doing this, credit markets are loosened and money is more readily available for lending and investing. That’s good for business. Which means it’s good for the industrial consumers of silver and, therefore, good for silver.

But the sudden and practically limitless injections of cash into the monetary system can have another effect: The debasement – both feared and actual – of the currency. This consequence sparks an interest in silver’s safe-haven benefit.

This QE effect on silver during the years of the 2008 financial crisis was historic, as illustrated by the chart below. When the first round of QE was announced in December 2008, both gold and silver started climbing, but silver was the stronger performer. 2010 saw the first positive U.S. gross domestic product (GDP) in three years as well as a second round of QE in December. You’ll notice silver sharply accelerated its rise at that time, greatly outdistancing gold. 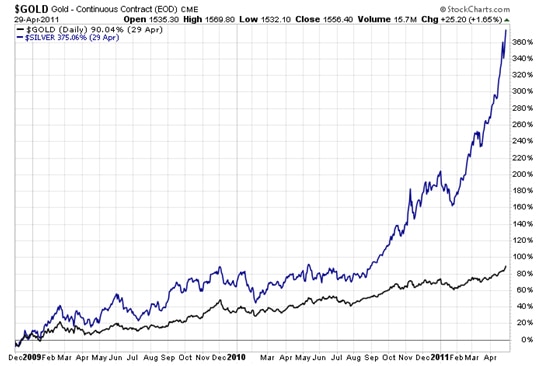 Fast-forward to the current economic crisis, and it certainly appears silver is responding in the same way to QE. The chart below illustrates the performance of gold and silver from the beginning of 2020 to the present. You’ll notice a little strengthening by both metals as COVID-19 concerns first took hold early in the year. This was followed by a brief but sharp selloff as the outbreak morphed into a full-blown pandemic and savers temporarily let their emotions get the best of them. However, once the Fed stepped in during the latter part of March and announced they would throw everything they had – including unprecedented QE – at the burgeoning economic crisis, both metals started appreciating again. And now that it’s clear to everyone the Federal Reserve won’t be ending its drastic program of assistance anytime soon, silver has again forged significantly ahead of gold. The trend suggests industrial silver buyers expect the business climate to improve and safe-haven silver buyers expect the currency to weaken further. 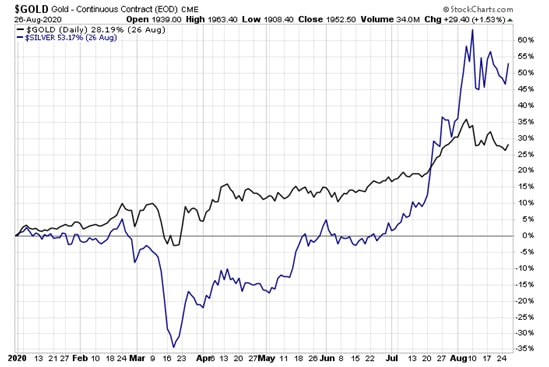 It’s clear that QE and record deficit spending – primary drivers of gold and silver – aren’t disappearing anytime soon. And because of silver’s especially great affection for these extreme monetary and fiscal policies, observers say to expect silver to continue getting the best of gold in this current metals market.

Related:  Exploring Silver in Your IRA.

In a client note written last week, Ned Naylor-Leyland, precious metals fund manager at Jupiter Asset Management, said, “There is plenty of upside for both gold and silver, in our view and … for silver to continue to outshine even gold. Naylor-Leyland pointed both to silver’s industrial demand and safe-haven demand as the reasons for his optimism. He specifically mentioned silver’s essential role in the medical and electronics industries as well as its utility as an inflation hedge as reasons he expects the silver surge to go on. Referencing its safe-haven property, Naylor-Leyland said that near-unfathomable sums of QE and deficit spending are “tipping investors over the edge in their distrust of fiat currencies — especially the US dollar.”

Do you own silver presently? It would be unsurprising if you didn’t. Even among those who follow precious metals, gold’s widespread appeal and cachet has a tendency to overshadow silver. But folks who look past silver right now are making a mistake, in my opinion. The unique and demonstrated effect QE can have on the white metal means silver could continue climbing for years. Given this distinct possibility, it’s curious that anyone – especially retirement savers – would avoid giving it a good look right now.