Gold and Silver Can Thrive Outside of Crisis Conditions

One of the ways in which gold and silver have been marketed traditionally is as crisis assets. The implication of a crisis asset is that it is of little to no value unless crisis conditions are in play. One clear example of a crisis condition during which precious metals thrived was the appropriately-named 2008 financial crisis, when a chain reaction of events jeopardized the stability of the worldwide banking system. From 2008 to 2011, gold and silver rose 160% and 400%, respectively.

There are, of course, other kinds of crises besides those rooted in economic turmoil. Geopolitical upheaval is one example of a non-economic crisis type that has sometimes cued a sharp, positive response in the price of gold. During the short-lived Iran-U.S. faceoff at the beginning of this year, gold spiked to what was then a near-seven-year high in the span of just a few days.

However, the attention paid to gold and silver as crisis assets has the potential to obscure an important reality about the performance of the metals. Namely, that for all of their perceived utility as safe havens during periods of upheaval, the metals also have demonstrated the capacity to rise in value over periods of time far longer than those that have measured the duration of international conflicts or even multi-year economic struggles. That reality suggests precious metals could provide a benefit to portfolios beyond that which might accrue solely from their response during crises.

Precious Metals Have Demonstrated Sustained Strength Since Start of Millennium

If you think of precious metals exclusively in terms of crisis assets, you might overlook the fact that both gold and silver have demonstrated impressive strength since the beginning of the new millennium. Take a look at the chart below. 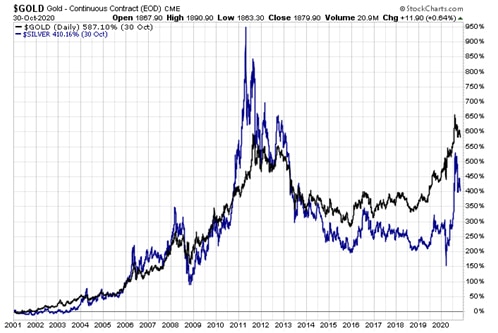 It’s easy to identify the price surges that occurred in both metals during the 2008 financial crisis. It is also easy to tell that both metals have been subject to volatility and even sustained downward trends over the past 20 years.

But there’s also no denying the price of silver has climbed over 400% and gold has risen nearly 600% over the last two decades. The ability of gold and silver to demonstrate this sort of resilience over that period of time helps to underscore the potential value of the metals outside of select moments in time when crises are unfolding.

Also Read:  How the Pandemic has Impacted the Labor Market

It’s important to remember that the historical performance of gold and silver over the last 20 years does not mean that performance will continue. It should also be noted that evaluating the historical performance of gold and silver over other long-term time frames will show different results. But the sustained strength of gold and silver demonstrated over the last two decades at least suggests the possibility that metals could have value as strategic assets and not merely as tactical assets to be deployed in select circumstances.In my opinion, standard narratives about gold and silver tend to focus too heavily on their potential to aid portfolios during periods of great turmoil. This focus can cause retirement savers to overlook the metals’ prospective benefits as core assets.

It could be conjectured that both the actual and anticipated applications of accommodative monetary policy and high levels of deficit spending create some of the most fertile conditions for precious metals. It is further reasonable to speculate those initiatives could have a positive influence on gold and silver without regard to whether they’re applied on behalf of acute crises. Indeed, we already have seen it.

Here’s an example. When the Fed announced in June 2019 that interest rates would be coming back down – after a 2018 in which they were hiked four times – both metals reacted favorably. Gold climbed roughly 13.5% from June through the end of 2019 and silver jumped about 21%. The metals’ rise during this period seemed to coincide with the return of dovish monetary policy and implied weakening of the economy – but not to a crisis, per se.

Recently, we learned that the Federal Reserve is planning to keep rates effectively at zero for potentially many years. This is out of deference to their stated objectives of achieving and maintaining maximum employment as well as a 2% average inflation rate. When Brainard outlined this agenda back in February, MarketWatch’s Greg Robb noted that “this could leave rates near 0% for a long time. The Fed has yet to hit its 2% inflation target a decade after the 2008 financial crisis. And many economists don’t think full employment has been reached either.”

The Fed outlook raises the possibility that drastically accommodative monetary policy – and associated measures – could be features of the economic landscape without regard to whether there’s a distinct crisis in play. The possibility seems even likelier given the nation appears almost entirely unworried about the possible consequences of a rapidly rising national debt.

We know that gold and silver have demonstrated real strength during the millennium’s first 20 years. There’s no way to know if that will continue. But we are allowed to believe our eyes enough regarding these first two decades to conclude that gold and silver have managed to show great resiliency as long-term assets and not merely as crisis assets. And given the nation’s current outlooks for both chronically loose monetary policy and record deficit spending, it’s reasonable to consider that gold and silver could continue to have value as fixed components of a retirement portfolio.