Gold is registering a far more measured performance in August thus far. Thathas many owners – and prospective owners – of the metal wondering if the best days of the current precious metals bull market are over already.

The concern is understandable. Gold has been demonstrating an unmistakable upward trend for well over a year now, with the metal going absolutely bonkers from April through July. Gold rose 13% in the second quarter, and improved on that impressive performance by additionally climbing the same amount in the month of July.

Awesome stuff. But with the arrival of August, gold apparently has decided it’s time for a rest. For the first three-plus weeks of the month, gold has engaged in a bit of a consolidation (sideways movement) pattern, revolving around the $2,000-per-ounce level. At this writing, gold is slightly down for August.

Although it is disconcerting for many to see gold sputter right now, it’s not a surprise to experts that the metal is taking a bit of a breather. For example, Barry Dawes of Martin Place Securities recently said he was looking for gold to consolidate as it continued pushing higher. Dawes has a 24-month price target for gold of $3,500 per ounce in his sights, and believes nothing has changed about gold’s underlying fundamentals that would prompt him to change his outlook.

Still, it’s tough for many to see gold suddenly spinning its wheels. So is it time to lower the curtain on gold’s run this time around? Or do blue skies and sunshine still lay ahead for the current gold bull market? As it turns out, not only do observers think gold has a lot of room left to grow, but if history is any guide, consolidations and even corrections can play a role in epic gold markets.

It’s always exciting to see an asset you own race toward the heavens. So when it appears that leap skyward is in the process of ending, excitement is replaced quickly by disappointment. However, some obstacles to ongoing positive price action are nota cause for real concern. They are, in fact, natural and beneficial components to the overall trend upward as they can help rein in potentially risky overvaluation. The historic rise of gold during the years of the 2008 financial crisis provides a good illustration of how consolidations and corrections can be an inherent part of a momentous surge upward in price.

Surely you remember the financial crisis. What you may not recall is just how well gold did as the crisis was playing out. From 2008 to 2011, gold jumped 160%. It did so on the strength of the same two influences that are propelling gold today: Massive Federal Reserve quantitative easing (QE) and record levels of deficit spending by the government.

But if you think that gold moved steadily upward for nearly three years without interruption in its price appreciation, you’d be wrong. In fact, there were many shorter-term periods during that broad push higher when gold seemed as though it had enough of the climb.

The chart below shows gold’s ascension from ’08 to ’11. If you look carefully at the chart, you’ll see there’s no shortage of moments along the way when gold either stopped appreciating or slid backward. From February to April of 2009, gold fell about 12% before it resumed its overall trend upward. The metal did the same thing from November 2009 to February 2010. And from June to July 2010, gold sank about 8%.

Performance of Gold, November 2008 to August 2011 (Chart Courtesy of StockCharts.com) 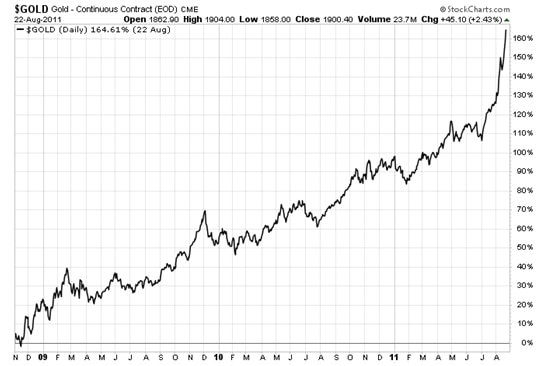 Indeed, corrections and consolidations seemed to be as much a part of the gold bull market 12 years ago as therise itself. Speaking of consolidations, look at the chart from January 2010 to April 2010. During this time, the price of gold stubbornly moved up and down inside of a trading range that was centered on about $1,100 per ounce.

What you will also notice, however, is that despite the numerous instances when gold appeared to run out of steam, the overall trend higher continued. This is because while the shorter-term price action of gold was vulnerable to trading volatility, the core, fundamental influences so favorable to the metal’s prospects remained unchanged. The same dynamics are applicable to the current market. Frank Holmes, CEO of U.S. Global Investors recently noted the continued relevance of pro-gold fundamentals in the present environment even as he acknowledged the metal was due for some consolidation.

“It’s important to keep in mind…that the metal’s long-term drivers remain intact.” Holmes says. “We have unprecedented monetary and fiscal stimulus, with more potentially on the way. There’s still trillions of dollars’ worth of global government debt trading with a negative yield.”

Holmes is just one of many who firmly believe gold is headed up even as it’s due for a pit stop. Ole Hansen, Head of Commodity Strategy at Saxo Bank, recently detailed his bullish outlook for gold while explaining why it may not necessarily demonstrate much upward momentum in the very short term.

“Gold is now set to be engulfed in a battle between short-term technical traders looking to sell, as the steep uptrend is broken, and longer-term buyers who missed the first move above $2000/oz.,” Hansen said. Nevertheless, he added that “overall we maintain a bullish outlook for gold and silver with loose monetary and fiscal policies around the world supporting not only gold and silver but potentially also other mined commodities.” Hansen also believes the highly volatile U.S. election season and frazzled U.S.-China trade relations “are likely to add another layer of support through safe-haven demand.”

With regard to expert gold price targets for the current precious metals bull market, there is plenty of disparity but the projections have one thing in common: A price for gold that’s significantly above where it is right now. At the outset of this article, I mentioned Barry Dawes’ 24-month price target of $3,500 per ounce. One expert forecasts gold at $10,000 per ounce before this gold bull stops running.

There’s no disputing the price of gold has moderated recently. But experts are advising those who own gold – or are still thinking about buying it – not to lose sight of the forest for the trees. Yes, gold seems to be running around in circles presently. But as long as the real drivers of gold remain firmly in place, any corrections and/or consolidations the metal experiences as it continues its trek higher should prove to be of little consequence.